Here we have listed some old question of llb third year

1.   What do you mean by principle of interpretation? Discuss the different aspects of principles with examples

2.   Clearly state the beneficial rules of interpretation with suitable example

3.   What do you mean by presumption against the retrospective legislation? Explain with suitable example

4.   Clearly state the mischief rule of interpretation with suitable example

5.   Write short notes on any TWO of the following

a.   Intention of legislature

2.   What are the allotment of shares? When shares are considered as irregular allotment and what are its effects?

3.   What is quorum? Explain the requirement of quorum for general meeting of public company and a private company. Discuss the consequences of the absence of a quorum at the meeting.

4.   Examine the decision of the Supreme Court in Tarani Prashad Adhikari VS G.M. surya bahadur,NKP 2065/1093 by outliming the facts and issues

5.   Write short notes on any Three of the followings

a)   Transfer of shares and transmission of shares

b)  “Floating Charge” and “fixing charges” 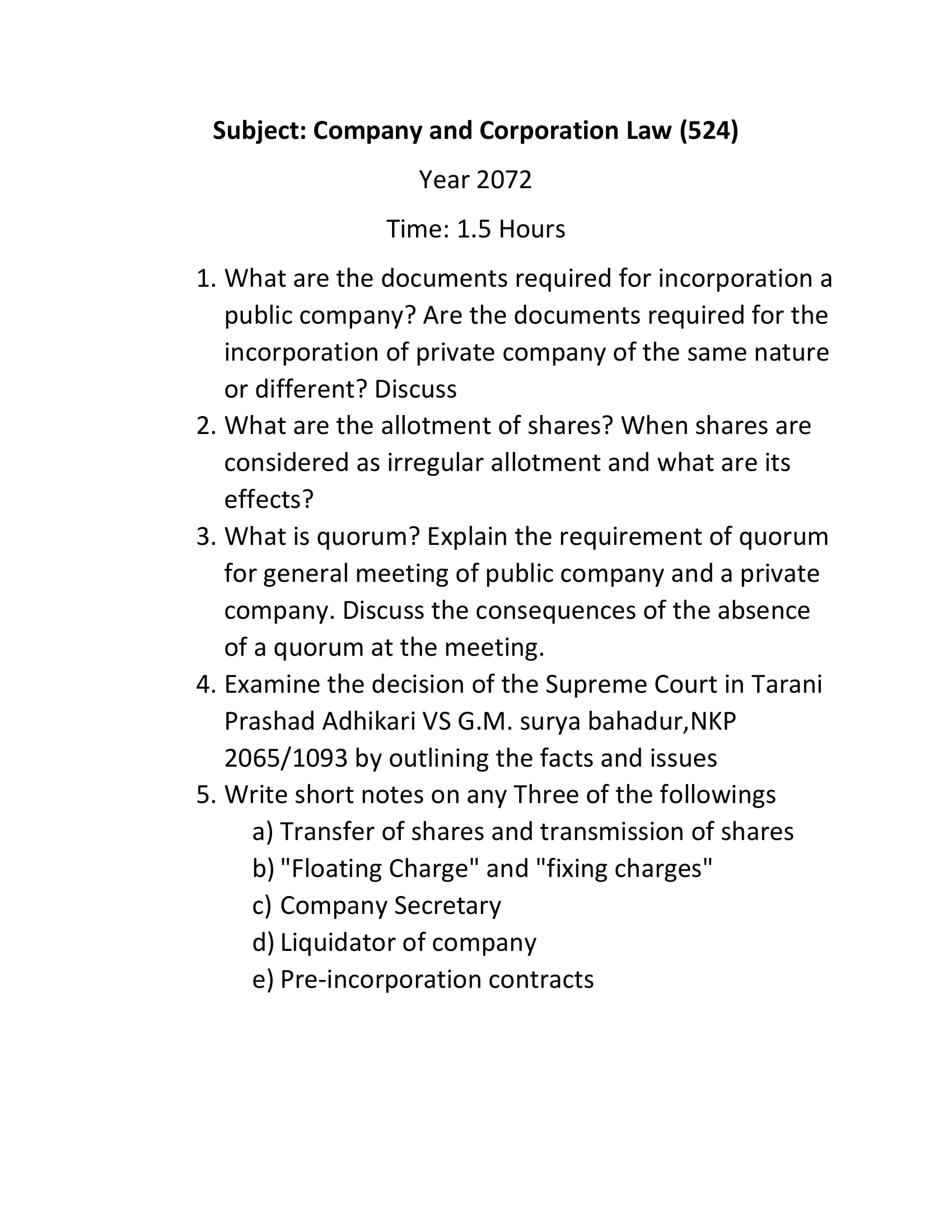 2 Discuss the rational of the establishment of United Nations organization. Has this international organization been successful in obtaining the objectives and purpose set out in UN Charter.

3. Examine the role of UN Security council in the maintenance of international peace and security.

5. How is the human right defined? Critically examine the implementation of human rights at national and International level.

7. Discuss the various legislative and administrative measures for the implementation of the Convention on the Elimination of All forms of Discrimination against Women in Nepal

8. Write short notes on any THREE of the following:

b)    Committee on Torture (CAT Committee) 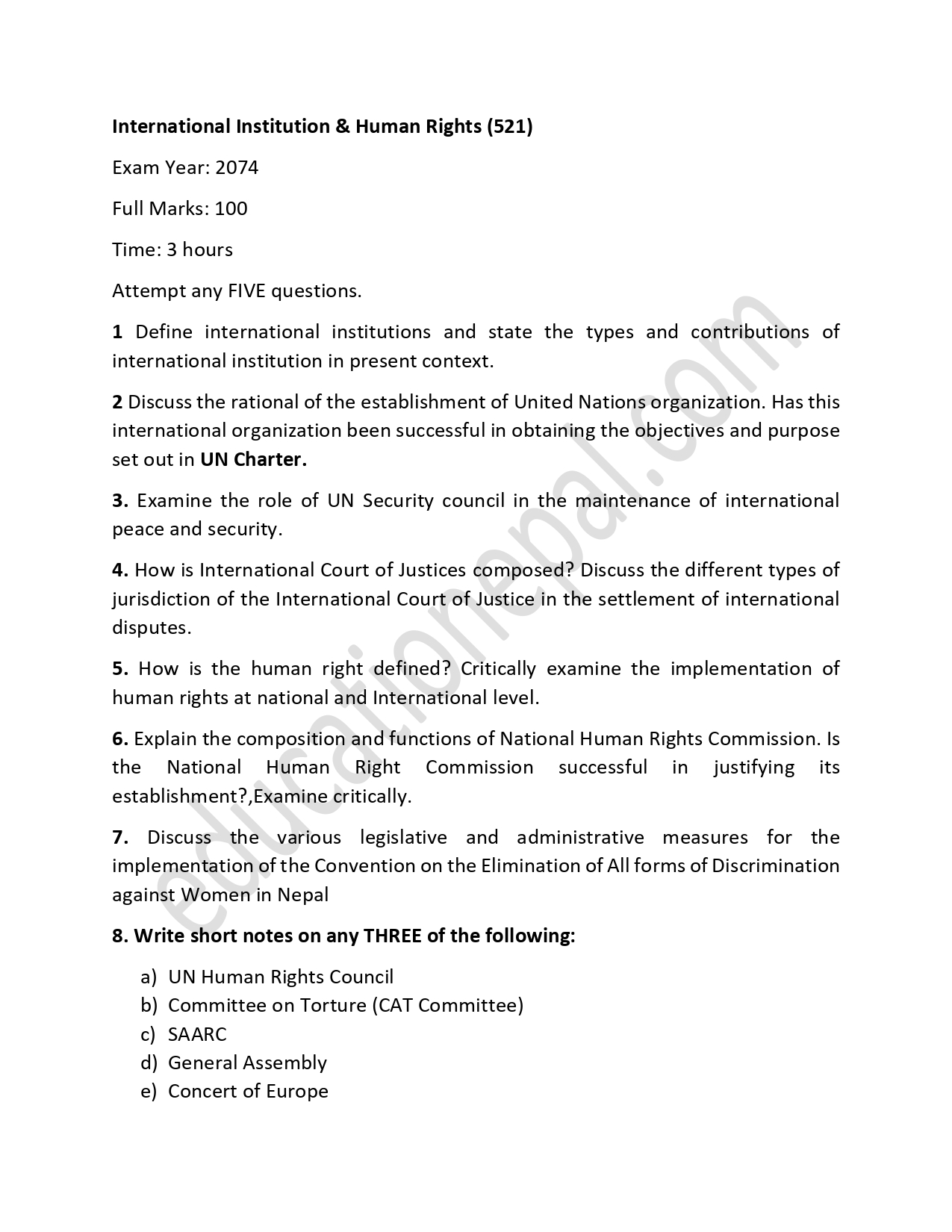 2. Discuss the various causes of the failure of the league of

Nations. Do you see the United Nations would not confront

With same fate of League? Give your reasons.

3. Examine the role of UN Security council in the maintenance of international peace and security.

5. How is the human rights defined? How far the Constitution of Nepal has been successful in ensuring and respecting human rights in the fundamental rights chapter.

6. Explain the role of United Nations in the protection and promotion of international human rights globally.

7. Discuss the various legislative and administrative measures for the implementation of the Convention against Torture and other Cruel Inhuman and Degrading Treatment or Punishment in Nepal.

8 Write short notes on any THREE of the followings:

b. International Bill of Rights 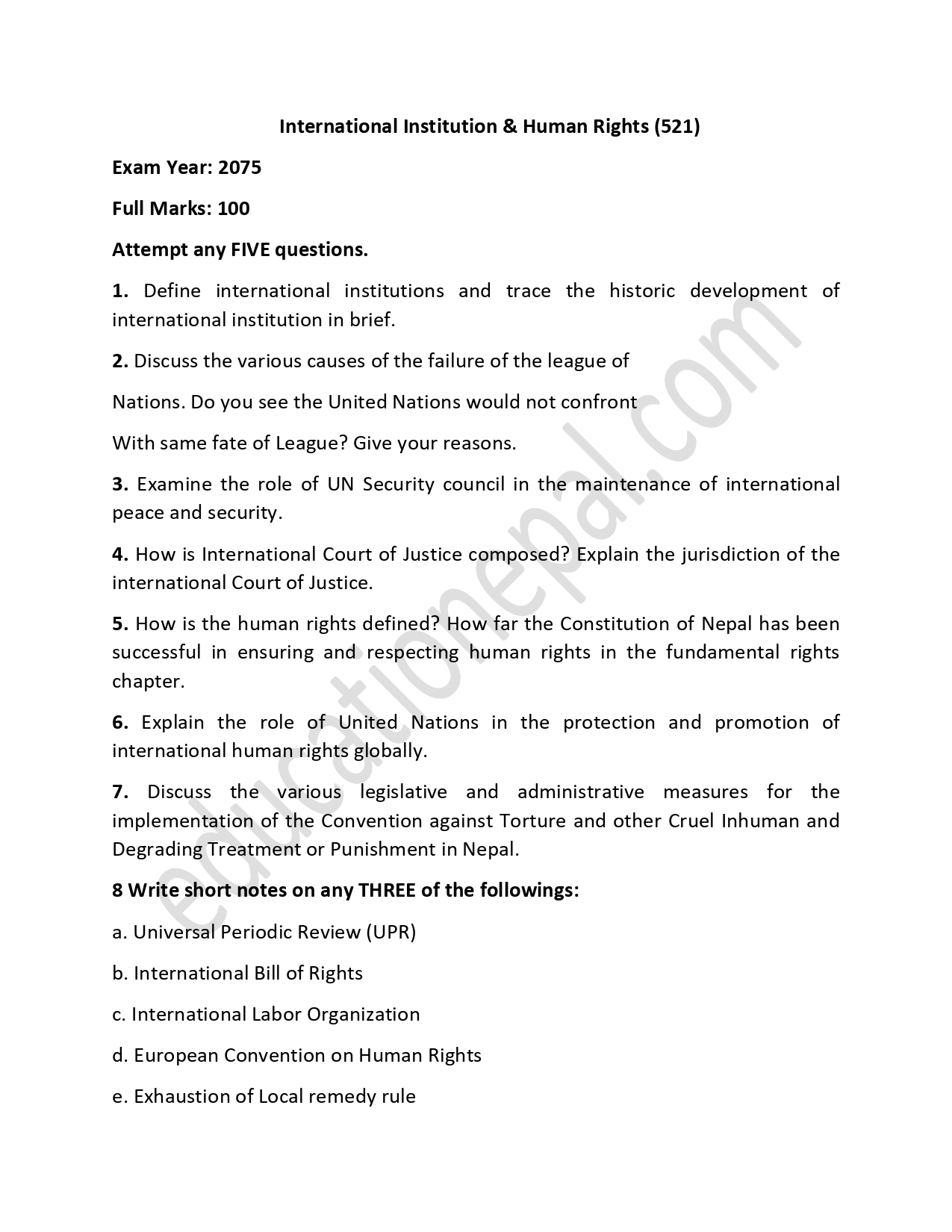 1.   Give a suitable definition of International institution and discuss it’s types and the contributions

3.   Trace the history of United nations and assess its role in the maintenance of world peace and order

4.   Discuss the composition and function of the General Assembly of the United Nations in brief.

5.   Elaborate the composition and jurisdiction of the ICJ on the basis of some decides cases

6.   What do you mean by human right? Briefly discuss the national and international mechanisms to implement human right

7.   Write an essay on the right of child in brief

8.   “National Human Rights Commission is a weak institution” Examine the role it plays and advise some measures it can functions effectively.

9.   Write short notes on any Three of the followings

2. What do you mean by professional ethics? Explain the personal responsibility of lawyers in brief

3. Define and differentiate between trail advocacy skills and communicative skills of lawyers

4. Comment the judgment in Badri Bahadur Karki Vs CIAA.

5. Write Short Notes on any THREE of the following